I came across this regional dish of Syracuse, New York a couple of weeks ago and decided to make it as an Instant Pot recipe.

I knew I had to make these salty young potatoes after I read the history of the Syracuse salt workers and how Salt Potatoes were their daily meal. 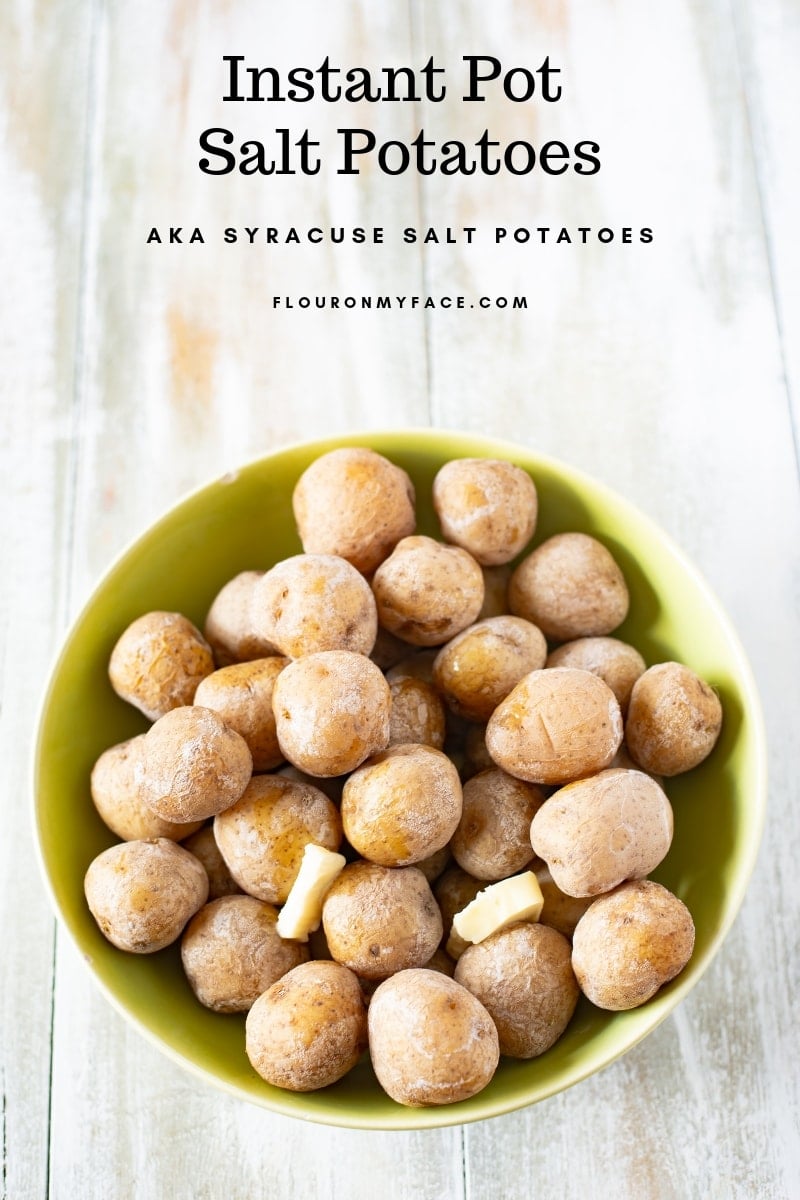 What are Syracuse Style Salt Potatoes?

From what I had read about Syracuse Salt Potatoes they sounded pretty good.

New and tender young baby potatoes boiled in a salt brine forms a salty crust around each baby potato that then seals the potato skin and keeps the water from penetrating the inside of the potatoes.

Cooked Salt Potatoes have a wrinkly skin with a thin layer of salt. 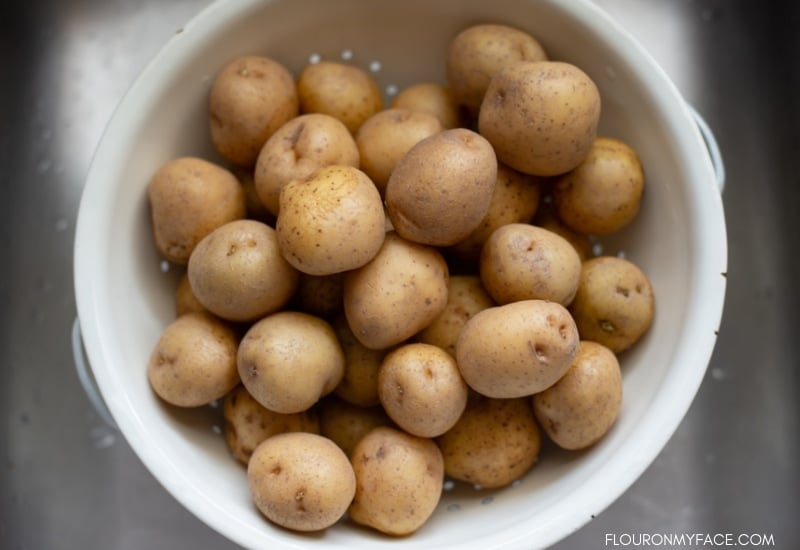 The Syracuse Salt Potatoes cooking method causes the interior of the tender young potato to have a fluffy creamy baked potato flavor that is better than any other potato cooking method around. Or so I read.

During the 1800’s the Irish salt miners of Syracuse developed this method of cooking potatoes in the free-flowing salt brine at the mines.

I wonder what some of those poor Irish miners would think today if they could see that Salt Potatoes are so popular. 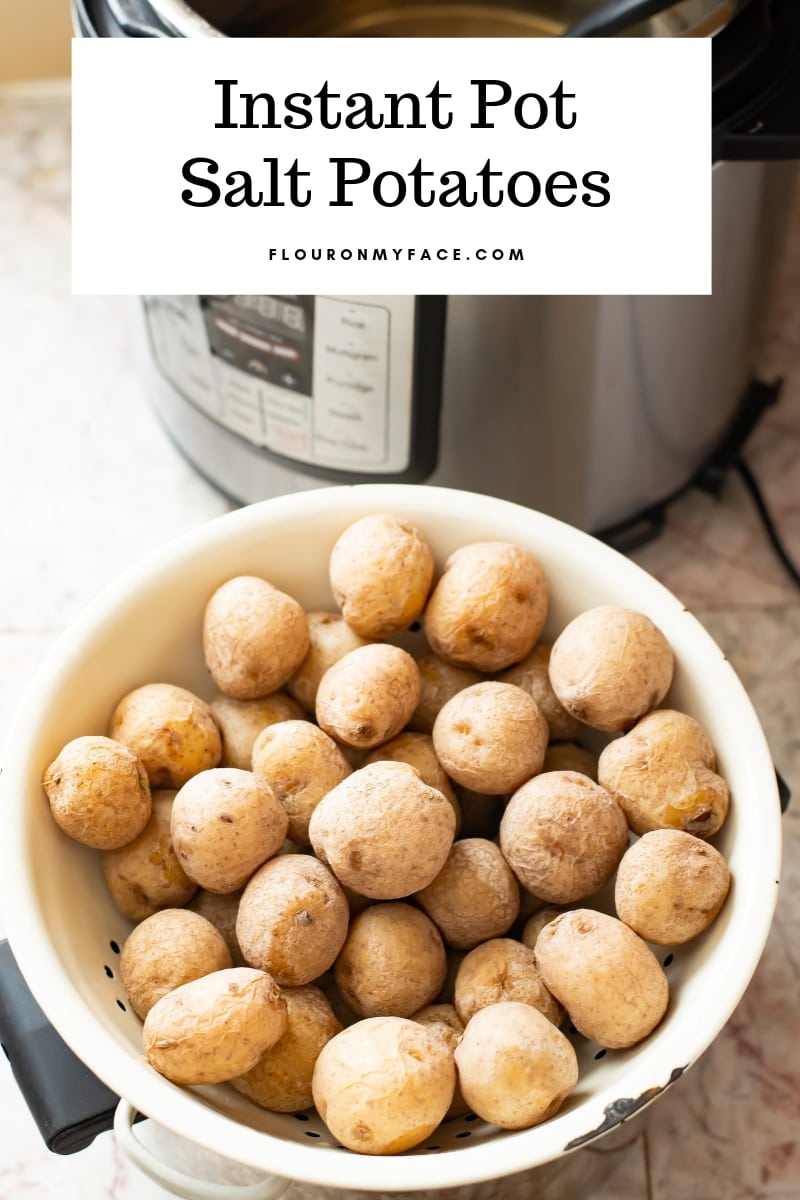 My husband is a meat and potatoes guy and I figured he would probably love these creamy on the inside, salty on the outside young baby potatoes.

I was right. He loved them and raved about how good they were.

He ate all 3 lbs of those creamy baby potatoes over the course of a couple of days. 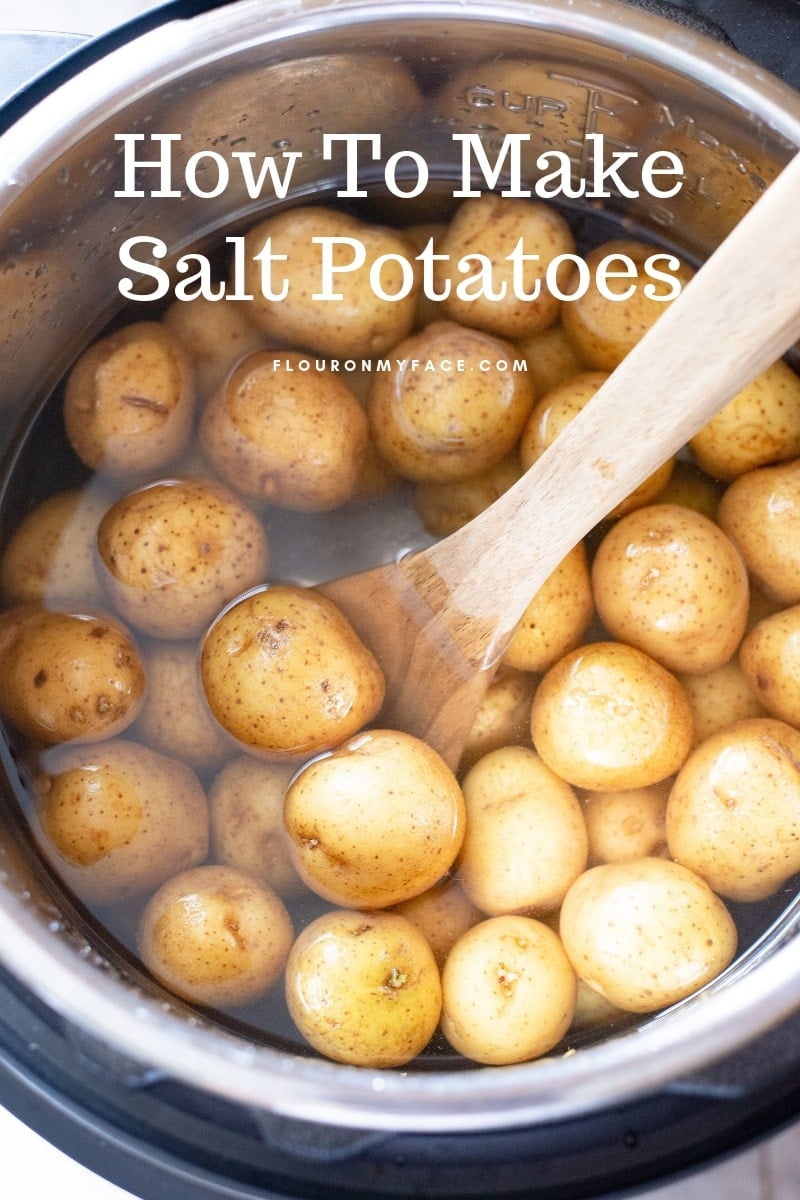 Since I have fallen under the spell of my Instant Pot pressure cooker.  I have been using it as much as possible.

I’ve already made Instant Pot Red Potatoes so I knew that making Syracuse Salt Potatoes in the Instant Pot would work out just fine.

My red potatoes cooked perfectly in the pressure cooker and also had a lovely creamy texture.

I suspected that these salt brined young baby potatoes would cook fine also.

What I was curious about was would the salt brine seal the outsides of the baby potatoes the same way it would if the salt potatoes were boiled in a big pot? 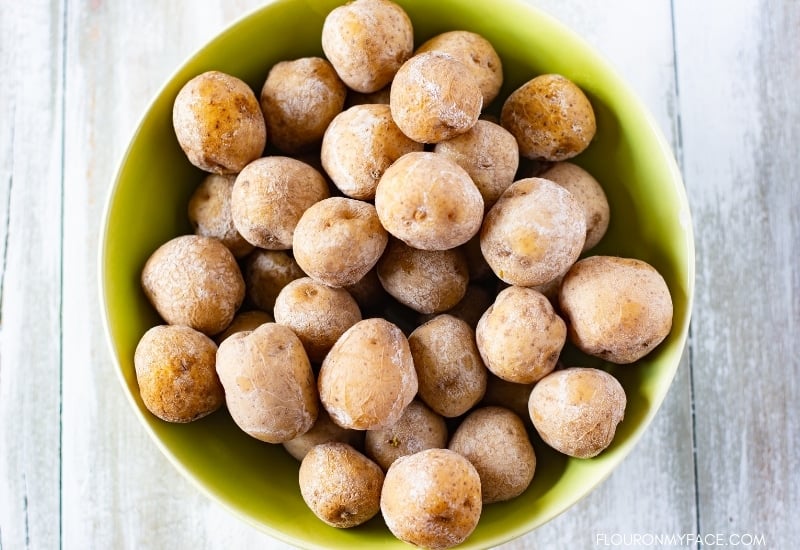 Check it out. You can see the salty layer on the outside of the salt potatoes I cooked in my Instant Pot.

When you first take the salt potatoes out of the salt brine you can’t really see the salt.

As soon as the air hits the outside of the potato skin and starts to dry off the salt begins to appear like magic.

How to eat Salt Potatoes?

Salt Potatoes can be eaten as is just like you would eat boiled potatoes as a potato side dish. Top them with butter and a sprinkle of your favorite potato toppings.

I ate the Instant Pot Salt Potatoes with butter and a sprinkle of Rosemary Salt and they tasted amazing.

Pin or Print the Instant Pot Salt Potatoes Recipe below 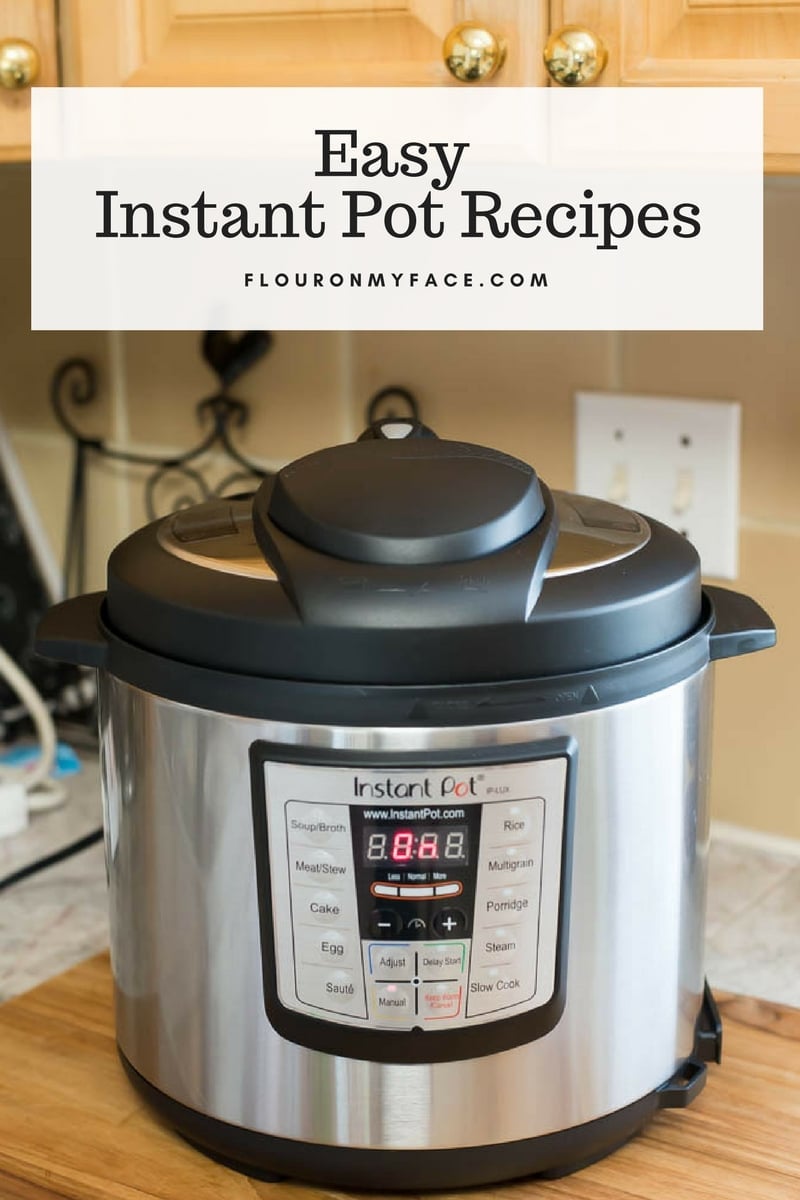 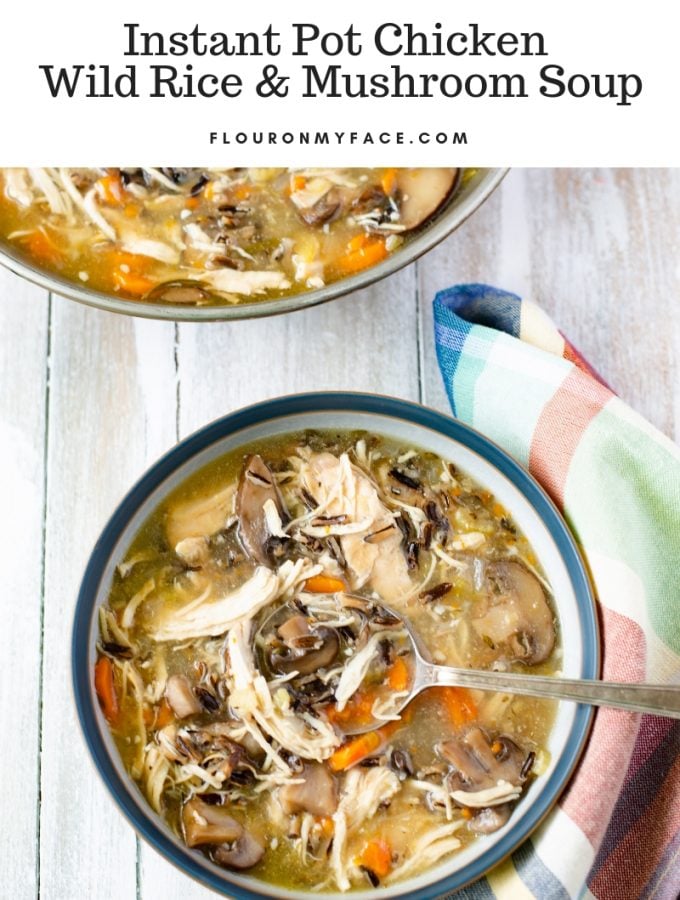 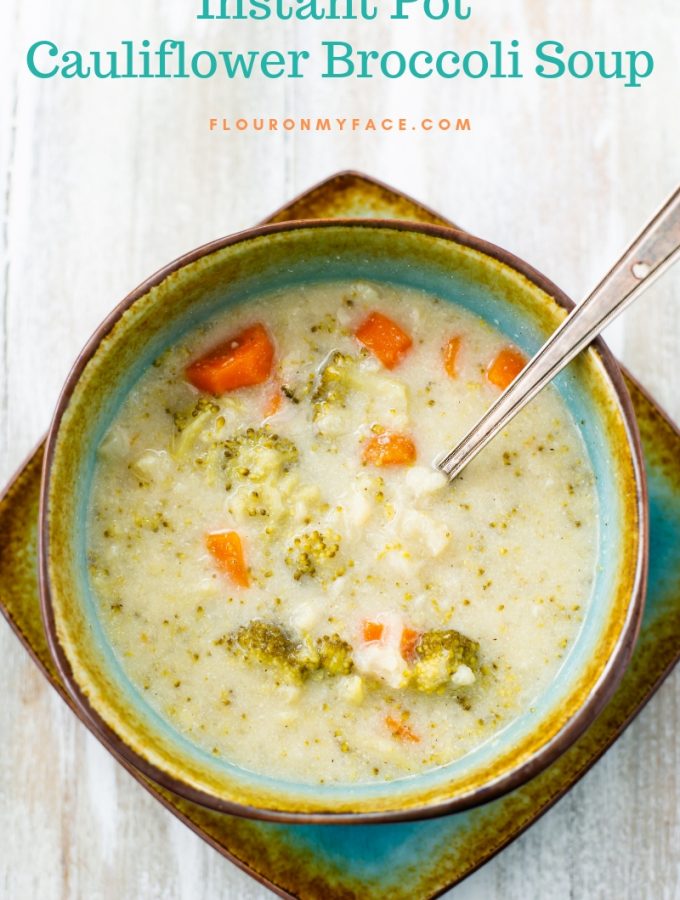